We are very excited  Dr. Matthew Tuininga, Associate Professor of Moral Theology at Calvin Theological Seminary will be with us for TFIU event on February 20th at 7:00pm.

The relationship between church and state, pastors and magistrates, believers and the government is one Christians have been navigating for centuries. In today’s atmosphere, few things are as polarizing today as political dialogue or as dangerous to the common good as the lack thereof. We are excited to be hosting this lecture on an important and difficult issue (or nexus of issues). The lecture will be held at ECC, February 20th, at 7:00 pm. 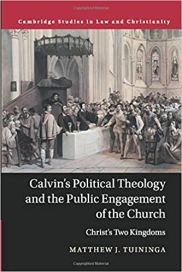 . Matthew Tuininga previously taught at Emory University, Oglethorpe University, and at Sewanee, University of the South. He speaks on topics revolving around Christian ethics and Christian cultural and political engagement.

His first book, Calvin’s Political Theology and the Public Engagement of the Church: Christ’s Two Kingdoms was published with Cambridge University Press in 2017. Dr. Tuininga has also edited On Charity and Justice, the final volume of Kuyper’s collected works on public theology, forthcoming with Lexham Press.

One Reply to “Special Lecture – Christian Politics: a Political Theology of Hope”

Why Christianity is Good for Science, with Dr. Ted Davis.